Uniting Water, Energy and Food at the WFE summit at Expo2020 Dubai

The Middle-East has specific water-energy-food challenges. Most Middle East countries are water scarce but have abundant fossil fuel reserves (e.g. Gulf Cooperation Council countries) and solar energy potential. Moreover, energy prices are often subsidized while the region has the world’s lowest water tariffs and the highest GDP spent on public water services (World Bank, 2017). Due to limited water and agriculture land resources, high percentages of the national demand for food are imported, and some Middle-East countries traditionally invest in agricultural production elsewhere in the world. Drinking water is mostly provided through groundwater or desalination of seawater, powered either by fossil fuel or (more recently) solar power. These strategies ensure food and water security, but also result in vulnerability. Food importing countries are dependent on trade-relationships and production circumstances elsewhere, e.g. current grain crisis due to the Russia-Ukraine war.

In 2022, the World Expo (EXPO2020) themed “Creating the Future” took place in Dubai. The theme chosen for the Dutch Pavillion was “Uniting Water, Energy and Food”. Part of the Dutch contribution to the Expo was the preparation of a high-level trilateral summit, together with Jordan and the United Arab Emirates (UAE) on Water, Food, and Energy. To prepare the discussions during this Summit, the Netherlands together with Jordan and the UAE initiated in 2021 a research collaboration and knowledge transfer involving academic, research and governmental institutions from the three countries through the implementation of the project “Assessing the WEF nexus ‘uniting Water, Energy and Food’ at the WEF summit”.  The Dutch technical contribution was led by the consortium formed by Deltares, Wageningen University and Research (WUR), and the Netherlands Organisation for Applied Scientific Research (TNO). This collaboration project was financed by the Ministry of Foreign Affairs of the Netherlands.

The aim of the project was to support the multi-sectoral dialogue by conducting a strategic analysis of water, energy, and food policies in relevant case studies in these 3 countries through a participatory systems analysis and under the nexus perspective.

A participatory system analysis approach was used to conduct the strategic analysis and following Blue Earth co-creation concept information was processed, communicate and visualized. Through training, workshops and the use of approaches and tools the consortium worked jointly with country coordination teams and relevant stakeholders. The approach started with the training of the country teams on system dynamics for the nexus analysis, group model building and dashboard development and use. This training provided the trainees the tools to facilitate country workshops. Each country workshop paid attention to its own with the participation of relevant decision-makers and stakeholders. In this workshop key WEF processes, drivers, impacts and potential interventions were identified and discussed, together with data needs. Based on the discussion a system dynamic model was build for each country case which allow interactive exploration of the impact of policies affecting the WEF Nexus in a participatory setting depending on the case study specific objectives. The cases included the study of adaptation measures identified by stakeholders under future socio-economic and climate scenarios. Additionally, a planning dashboard was co-developed with stakeholders for each case to communicate and visualize relevant outcomes of interest. The link to the dashboard https://storymaps.arcgis.com/stories/9a3fd17260254a56ae52c293e4bc901d. 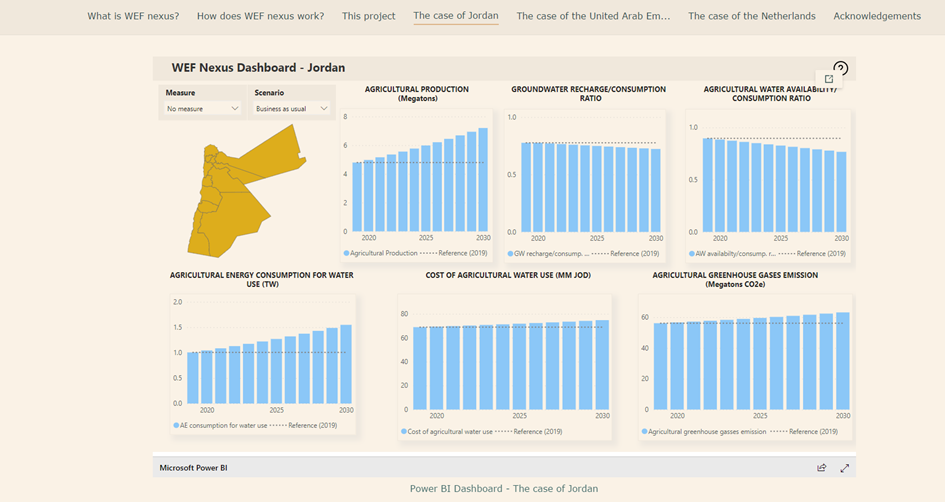 The results of the project, including the policy dashboard were presented during the Water-Food-Energy Nexus Summit in January 2022. The Summit was opened by the Dutch Minister for Foreign Trade and Development Cooperation Liesje Schreinemacher: https://www.netherlandsandyou.nl/latest-news/news/2022/01/19/waterfoodsummit