The development of mathematical models for predicting creep in geomaterials, and making those models suitable for practical use, are central to this project. Creep is a phenomenon that is seen, for example, in soft soils, resulting in time in deformation in the ground. It is seen frequently in the Dutch peat areas that Deltares works with. Sound computing models are now available for vertical creep (ongoing settlement of the surface). However, it is difficult to predict horizontal creep using the models currently available. 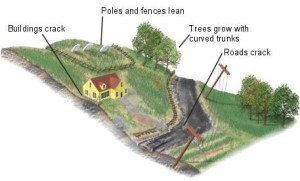 Combination of university and industry

In this project, which received financing from the European Union, a range of universities teamed up with engineers from industry. This made academic knowledge available to the commercial sector. In time, this will lead to improvements in predictions of how creep works in a range of soil types and in major projects such as dike upgrades.

A range of models were analysed and tested during the course of this four-year project. Deltares has acquired experience with these models in, for example, laboratory tests on peat. The aim is to apply our expertise with the advanced mathematical models to peat areas in Holland. Towns like Gouda and Waddinxveen have a lot of problems with subsidence and the ground level is raised regularly using sand. A good model can predict creep and optimise the approach. During dike upgrades, calculations can be carried out to see whether the foundations of the houses close to the dike can cope.

All research facilities
Back to Roads and railways in delta areas