Impact of bow thrusters and propeller jets on bed protections

In a cooperative project with the Port of Rotterdam, the Port of Antwerp, Holcim and the Dutch Ministry of Public works (Rijkswaterstaat), Deltares performed physical scale model tests to determine the impact of bow thrusters and ship propellers on water beds. The Dutch National Civil Engineering Association (SBRCURnet) coordinated the project. The project has increased knowledge on bed protection measures. This will eventually lead to major savings on bottom protections when the required strength and extent of these measures can be designed more accurately. 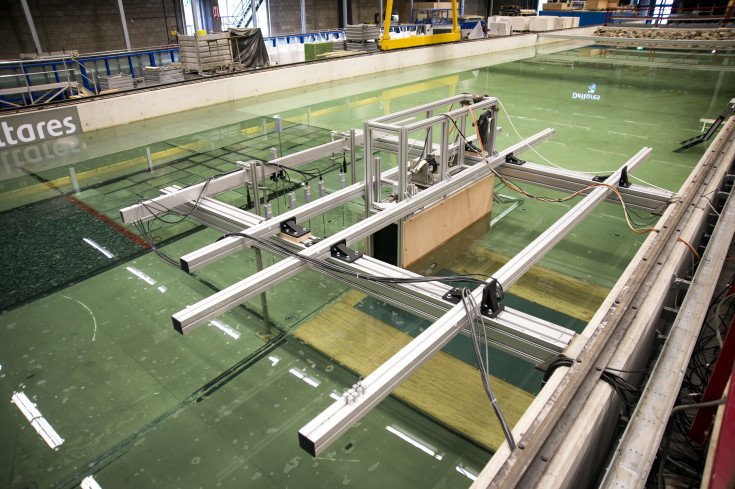 High flow velocities caused by ship thrusters can result in large pits in water beds (scouring) that may, in extreme cases, even undermine quays, embankments and other structures. To prevent this, scour protection is used near structures such as quays and locks. Such protective measures consist of loose materials (rocks), block mats, concrete or asphalt.

The aim of the physical scale model tests performed in this project was to establish the governing conditions for different propeller and bow thruster configurations. One test series focused on flow velocities produced by bow thrusters at specific distances in front of a quay. A second test series considered the impact that ship main propellers have on scour protections of loose rock and block mats.

The bow thruster tests considered a schematic ship hull that included a transparent thruster tube. This made it possible to measure the outflow velocities generated by the propeller, even when the ship was very close to the quay, and without disturbing the flow field. The full ship model could not be reproduced, but the approach with the schematic hull shape ensured that the blunt blockage of the hull was represented. Flow velocities were also measured at an array of horizontal and vertical positions around the ship hull and between the ship and the quay. Pressure fluctuations were measured with probes positioned in a raised floor as to not to disturb the flow conditions.

Results of the bow thruster tests were provided to the participants as measured loads for given outflow velocities and data were compared to existing formulae from literature. These formulae describe for a given outflow velocity of the jet where the critical bed flow velocities will occur and with which strength. In this they also take the influence of the nearby quay into account. The critical flow velocities at the bed dictate the minimum required strength and extent of the bed protection measures. The outcome of this study indicates that the guidelines are often – but not always – conservative (on the safe side) for this situation and could be optimised.

A follow-up phase is foreseen to perform additional measurements for verification and to consider other situations. When successful, the results will make it possible to design less heavy scour protection measures, or to limit their extent to smaller areas. Ultimately, this can generate major cost savings.

All experts
Back to Ports and waterways