The Netherlands needs new types of water management in order to be prepared for the impact of climate change. Deltares has teamed up with Rijkswaterstaat to develop the ‘inland shore’ concept, a new approach to water storage that combines different functions. The concept has been used for the first time in the Koopmanspolder near Andijk in North Holland. The functions have been designed to support nature, fish and leisure facilities. The first tests with the flexible water level in the Koopmanspolder are bearing fruit. Now that the polder is partially submerged, the number of birds in the polder is almost impossible to count, and exceptional varieties such as the ruff and the pintail have already been spotted.

In late March of 2014, the water level in the polder was raised approximately 20 cm by letting in water from the IJssel Lake. The effect was obvious within 24 hours: not only did the landscape change, there was also an immediate response from the bird population. Thousands of birds moved into the submerged meadows: black-headed gulls and redshanks, but also more unusual varieties such as the ruff, black-tailed godwit, shoveller, pintail, garganey and common teal. 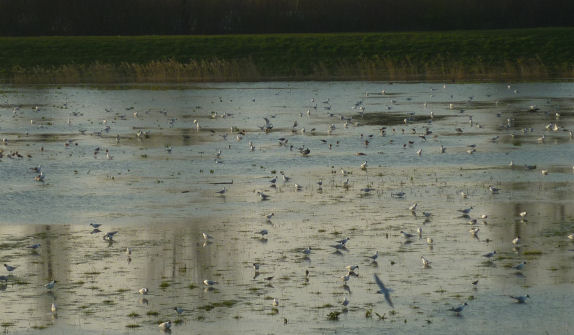 The Koopmanspolder is not only a re-structured nature area; in the years to come, it will be a testing ground for the water management of the future. In 2012, the polder was reshaped before being allowed to rest in 2013 for a year so that vegetation could develop.

Flexible management of water and the water level

Over the next three years, the water managers of Rijkswaterstaat and the Hoogheemraadschap Noorderkwartier water authority will be working with Deltares on experiments with the flexible management of water and the water level. In 2014, the water in the polder will more or less track the natural level, with high water in the winter and low water in the summer. Remco van Ek, a senior expert and consultant with Deltares: ‘I am extremely enthusiastic about the Koopmanspolder. It is a fascinating testing ground, where we can play with the water level to observe the effects in practice. Even though we know a lot about possible effects, it’s only really convincing when you can actually demonstrate those effects in practice. We talked to the local people about the trial. Now the initial results are clear for everyone to see, we are getting lots of positive feedback. The trial will also involve a lot of waiting. As things progress, we will be keeping a close eye on developments’. In 2015, we will lower the level to simulate drought and, in 2016, we will test the effects on the safety of the dike and the hinterland, water quantity, the water quality, nature and the living environment when the polder is used for emergency water storage. Deltares will play a central role in monitoring and evaluation.

Starting this year, the Koopmanspolder will be open to the public from 15 July to 15 October. At other times, the area will be closed off to protect breeding birds and wintering populations.

The Polder Museum in Andijk has a temporary exhibition about the developments in the Koopmanspolder. See www.poldermuseum.nl