MARS: The Importance of Groundwater in Multi-stressed Aquatic Ecosystems

The Status of Europe’s Surface Waters

In 2015, only about half of Europe’s surface waters had the ecological status of ‘good’. Much effort is being made to reach the Water Framework Directive goal to have a good status for all freshwaters in 2027, but there are still many unknowns about multi-stressed systems which hampers progress. The MARS project (Managing Aquatic ecosytems and water Resources under multiple Stress) is researching how stressors interact and affect the aquatic ecology. In ecological research, groundwater is often overlooked while it is a vital part of the hydrological cycle and therefore must be taken into account when restoring freshwater systems.

“Groundwater is a vital part of the hydrological cycle” 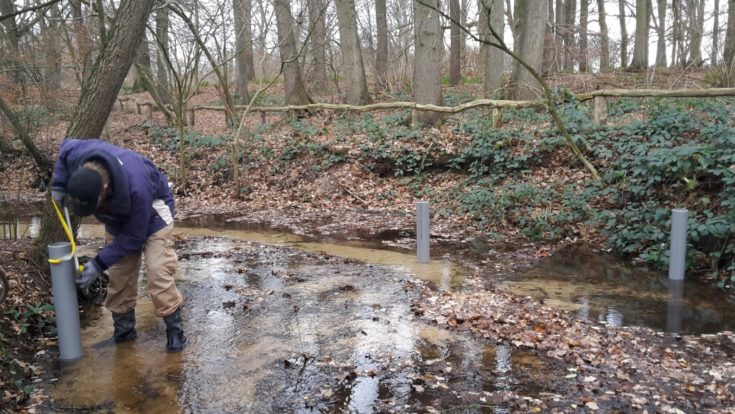 How does Groundwater influence streams?

Research is done on stream baseflow which is provided by the groundwater: streams with a high groundwater contribution are less susceptible to falling dry during summers. Groundwater has an effect on are important habitat parameters for the ecology: the amount of discharge, water chemistry and water temperature. Using two fiber optic cables with a length of 1.5 km, the temperature of two streams is being monitored to study the effect of both groundwater and shading. Existing datasets of discharge, water chemistry, groundwater, ecology and climate are used and enhanced with new field measurements.

“Groundwater can be used to reach Europe’s ecological goals”

A system-based approach is needed to restore Europe’s freshwaters: groundwater is a crucial factor in this: groundwater can be used and influenced in such a way that it will help to reach Europe’s ecological goals. This research will provide water managers with insights which will assist them in taking the right catchment scale measures. For instance, knowledge of a stream’s temperature can be used to take measures which reduce the effect of climate change on stream water temperature and thus ecology. In addition, understanding of groundwater travel times is needed as it influences the time scale at which measures have an effect.

All research facilities
Back to Understanding systems: from river basin to coastal zones