Deltares has been involved with the North-South metro line in Amsterdam for many years as a strategic consultant providing second opinions about plans and designs. Since the major setbacks during the construction of the Vijzelgracht station in 2008, Deltares has been working together with the Metro organisation on the introduction of a risk-based approach. This is a pro-active approach that, in a clear change from the past, is closely involved with day-to-day operations.

As a result of the consistent application of the risk-based approach and specialist knowledge, Deltares has helped to regain the trust of Amsterdam after the setbacks, and construction has proceeded in a controlled way since.

Deltares is conducting appraisals for the Metro organisation to see whether the geotechnical risks are acceptable in all stages of the construction process. For example, Deltares is looking at the basic principles underpinning the design, but also at how the design is implemented in the contractor’s working plans, what is being monitored and how, and what measures have been devised as back-up. In effect, Deltares asks ‘what if?’. What if: bentonite is left behind in a joint in one of the D-walls/ monitoring values are exceeded / there is seepage in an excavation pit?…

At the station locations, excavation work goes down to a depth of thirty metres. This involves a wide range of geotechnical risks and so risk management is a major concern.

In collaboration with Adviesbureau Noord-Zuidlijn, a computer model was developed for vertical equilibrium in the deep stations. A probabilistic approach and the optimal coordination of design and execution meant that the drawbacks (in terms of costs and planning) were kept to a minimum. 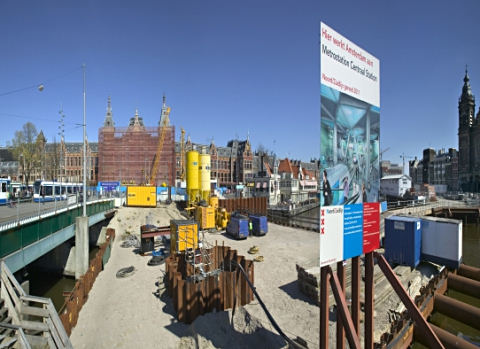 Deltares was also called in to help assess operational situations, as in the case of the Vijzelgracht station. Here, freeze lances were installed to prevent leaks. In advance, possible scenarios were discussed and response measures planned in consultation with the operational management and the contractor. During site inspections conducted as soon as any anomalies were observed, it was possible to determine whether these plans actually included the right responses.

To determine the local impact, measuring instruments were installed in a wide range of buildings and in the subsurface. In consultation with the Metro organisation, Deltares analyses the resulting data to check for compliance with the tolerances. When Deltares suspects that the local impact is exceeding the limits, it advises the most appropriate additional responses, one example being ‘compensation grouting’ to prevent major subsidence. The involvement of independent experts from Deltares has also played an important role in regaining the trust of local stakeholders.

After so many years of consultancy work, major lessons have already been learnt from this project. Deltares maintains an overview of what has been learnt, and disseminates the knowledge at national and international conferences, and in publications, so that others can benefit. Not everybody is building metro lines, but more and more complex urban projects are being built. So the lessons learned can be very useful indeed.

One example of the shared benefits can be seen in the construction of a 23-kilometre-long metro line in Tel Aviv, where Royal HaskoningDHV is working on this ambitious plan and Deltares is contributing specialist knowledge and the risk-based approach.

All publications
Back to Underground construction in urban areas