Passive sampling for the effective monitoring of pollutants in water

As a result of human activities, chemical substances such as pesticides and traces of medicines enter the surface water through sewage water and groundwater. High concentrations of these substances may be a risk for people and the environment. Monitoring with passive sampling is an effective way of establishing an accurate, early picture of the risk, making it possible to take the appropriate measures.

Passive sampling is a measurement technique developed by geochemical and microbiological laboratory of Deltares that has been tested for sewage, surface water and groundwater. The samplers consist of silicone rubber.

The usual approach to monitoring involves analysing a litre of water taken from a random location. Passive samplers are deployed in the water for periods of several weeks or months and so they can be used to observe fluctuations in the concentrations of chemical substances. The standard approaches for sampling often miss those fluctuations.

Nevertheless, this information is essential because it gives water managers a better picture of water quality and when contamination actually occurs. As a result, they can take the appropriate steps in good time to prevent the pollution of surface water and groundwater. 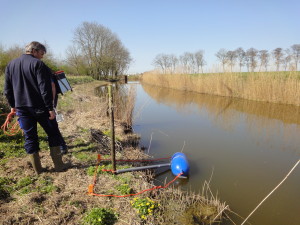 This is important because pesticides and traces of medicines ultimately make their way into surface water or the subsurface. They can infiltrate groundwater down to large a depths of 10 metres. That process can take a long time. Measures to reduce levels of undesirable pollutants in groundwater take effect only after many years and so the sooner action can be taken, the better that is for water quality.

Easy to transport and process 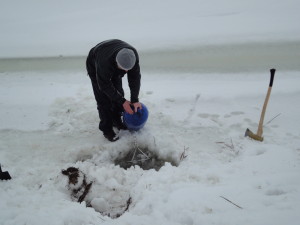 ess and easy to transport. They can also be stored for long periods of time: they can be kept in the freezer until they are worked up and analysed in the laboratory. This means that passive sampling is a measurement technique with considerable potential, not only for water managers in Netherlands but also elsewhere in the world.

Deltares has succesfully applied the technology in several areas in the Netherlands. The samplers have been installed in the surface water in several studies conducted in collaboration with water authorities. The standard approach was also used in these studies to sample a wide range of pesticides in order to compare the two approaches and analyse the differences between them. Significantly more substances, sometimes five times as many, 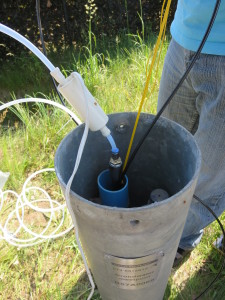 were found on the passive samplers. Substances were even found that cannot be measured at standard levels in the usual water samples.

The method was also tested in groundwater, resulting in the same conclusions. For example, in the province of Noord-Brabant, the samplers were positioned in a number of observation wells at depths of approximately 5 and 25 metres. Once again in this study, water samples were taken in the standard way to allow for a comparison of the two approaches.

for waste water and waste from hospitals

Passive samplers have also been used in other projects to map out the impact of waste water on water quality. In a multi-year project, an artificial wetland was studied to see how effectively it removed substances such as pesticides and traces of medicines. And a number of projects studied the effect that hospitals have on the total quantity of trace medicines that ultimately enter the sewage treatment system. It was found that it was not hospitals but residential areas that were the main source of most medicines. 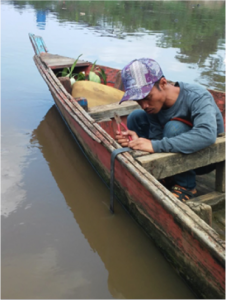 A large crane population spends the winter in a nature reserve in California. The reserve is in the middle of an agricultural area and so there was a concern that the cranes could be exposed to excessive amounts of pesticides. Passive sampling was used to identify the pesticides that are a potential problem.

In order to establish a picture of the use of pesticides in tropical agriculture and medicine consumption by the local population, passive samplers were used in the Citarum River near Bandung on the island of Java.

The measurement data are used to check estimates of agricultural emissions and to determine the impact on human health. That allows us to make better predictions of water quality after measures are implemented. It also gives us an insight into how those measures benefit human health.

Back to Hormones, trace pharmaceuticals and antibiotic resistance