Many estuaries worldwide have been modified in the past decades to centuries, for example by reclaiming land or to allow ever larger ship access to inland waterways. These human interventions often lead to higher suspended sediment concentrations (SSC). As a result, the visibility reduces, leading to a decline in primary production which is the base of the ecological food chain. An example of such an impacted estuary is the Ems Estuary on the Dutch-German border. Deltares quantified historic changes in SSC, related these to human interventions, and advised on mitigating measures. 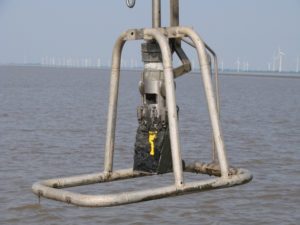 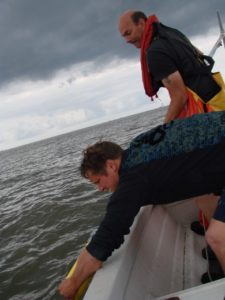 Results
Statistical analyses of historical data available at four observation stations in the estuary revealed that SSC is increasing with 0.5% to 3% per year. In order to explain these observed changes, a numerical model was constructed to systematically test the impact of historic human interventions. The implementation of ports in combination with a dredging and dumping tool was essential to the model setup. Additionally, a bed module allowed for buffering of fines in the seabed. 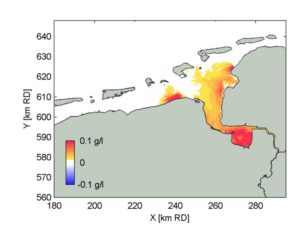 Detailed model analyses showed a surprising result. It was previously thought the main impact on SSC would be the deepening of access channels and disposal of sediments dredged from ports and waterways. However, the largest human impact was related to changes in sediment sinks. For several decades, large amounts of fine-grained sediment were dredged and brought on land. Ending this practice resulted in a substantial increase in SSC from the 1990’s onwards. Similarly large amounts of sediments used to be deposited naturally on intertidal areas for centuries. This accumulation was accelerated by land reclamation works. Without land reclamation works, little net sediment sinks remained in the estuary, leading to increasing SSC. For several decades, this effect was obscured by large-scale sediment extraction from ports and waterways.

Implications
The results of this study on the role of sediment sinks form the basis of restoration measures carried out by local and national governments, and are aimed at reducing SSC by extracting sediment. Extraction strategies are aimed at beneficial use of sediments in an environmental-friendly and cost-neutral way. Pilots aim to convert suspended sediments into building material for strengthening of dikes, and include the on-land ripening of clay and creation of new intertidal areas to accumulate fine sediments.

All publications
Back to Understanding systems: from river basin to coastal zones