RWsOS North Sea is a state of the art forecasting system for water levels and waves on the North Sea. In the last few years, a new forecasting system has been developed. This involved both advanced model development as well as the set-up of an operational forecasting shell based on the FEWS framework.

The North Sea is not always our friend, but can act as an enemy as well. Therefore, the understanding and prediction of waves and water movement is essential to the safety of the Netherlands. 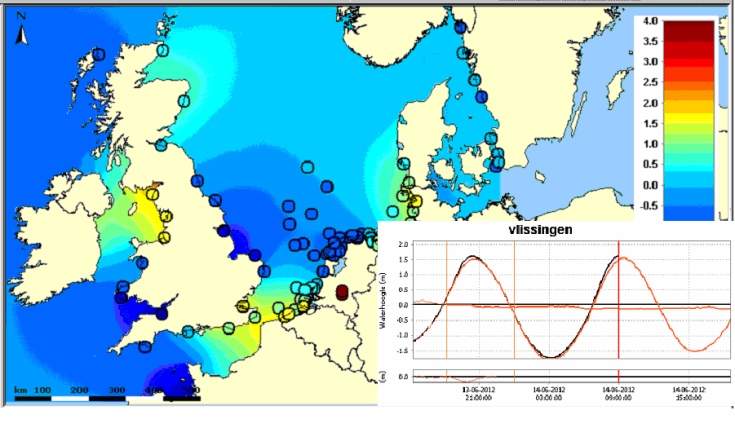 The North Sea is one of the busiest seas in the world with dense ship traffic, fisheries, wind farming, recreation and many other activities. All these activities depend on the ‘marine weather’. Accurate forecasts of waves, currents and sea level are crucial for operational management and for issuing warnings during extreme events. The operational forecasting system in the Netherlands has been operational since the 90’s.

Over the last few years, a new generation forecasting system for the North Sea and the Dutch coastal waters has been developed. This involved both advanced model development as well as the set-up of an operational forecasting shell based on the FEWS (Flood Early Warning System) framework.

As part of this operational system, a new operational flood forecasting model for the Northwest European shelf has been developed (DCSMv6). This model computes water level and flow forecasts, based on meteorological forecasts. The short term forecasts are further improved with data-assimilation. The wave forecast are computed by the SWAN-North Sea wave model, based on meteorological forecasts and the ouput of the DCSMv6 model.

Since the start of the storm season on September 1st 2013, this new system has been used operationally by Rijkswaterstaat (Dutch Ministry of Infrastructure and the Environment) and the Royal Netherlands Meteorological Institute, KNMI.

The system is a major step forward both in accuracy of the model forecasts and for forecasters to cooperate between multiple offices. In daily operations, the system is used for water management of Dutch coastal waters, e.g. to ensure maritime safety on busy shipping routes towards the large sea port of Rotterdam. During storm surges the forecasts will be used to issue warnings, based on which measures can be taken to prevent flooding.

RWsOS North Sea is used to collect all necessary data and coordinate computations. Automated runs are scheduled 4 times a day, following the release of new meteorological forecasts from KNMI. Manual runs can be scheduled when required. The system automatically synchronizes between multiple forecasters located in different offices or through mobile telecommunication. Model output can be inspected and compared with observations, to assist forecasters to decide on appropriate warning levels.

RWsOS North Sea is developed by Deltares. Deltares is continuously working on it and improving it in line with the user’s needs. The client is Rijkswaterstaat and the work is carried out under the “Kennis voor Primaire Processen” programme.