Since the early 1970’s major parts of Jakarta are suffering from excessively high rates of land subsidence which have brought down the land level by 2 to 4 m. The BBC recently claimed that Jakarta is currently the world’s fastest sinking city. Over the years, the subsidence has led to growing instances of riverine and marine flooding and increasing infrastructural damage, notably in northern Jakarta which borders Jakarta Bay. As continued subsidence would exacerbate the already bad conditions and render parts of northern Jakarta uninhabitable, over the past few years, massive, integrated flood defense measures have been designed. This masterplan, that includes river dikes, sea dikes, new polders with associated pumping stations, and an outer seawall in Jakarta Bay, should buy Jakarta time to stop the subsidence by strongly reducing the pumping of groundwater.

In 2017 Deltares came with updated subsidence prognoses for northern Jakarta. These prognoses quantify how subsidence will progress over the next decades under different scenarios of groundwater use. The prognoses provide input for the planning process of the huge construction efforts. A report elucidating the underlying calculations is now available for download. 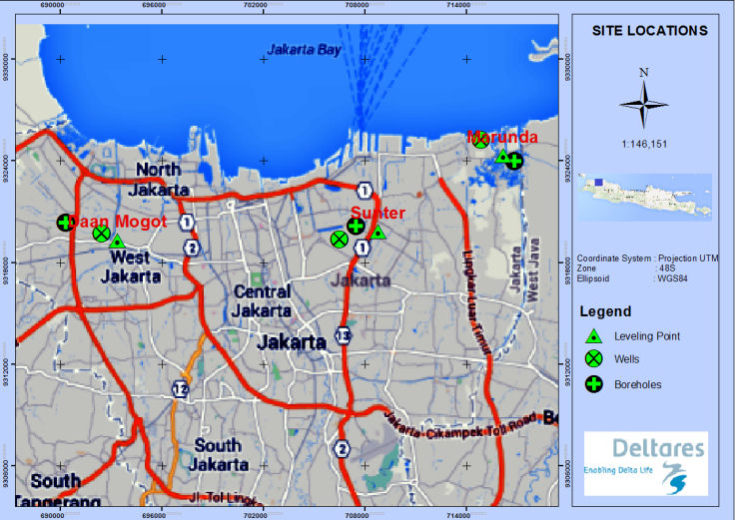 The three ‘locations’ for which subsidence scenarios are developed.

Necessity to strongly reduce groundwater use in northern Jakarta

The prognoses were made for three locations in Jakarta with the most comprehensive data on subsidence over the past decades, geology, geotechnical properties, and groundwater levels. Results show that even when pumping is reduced to the extent that hydraulic heads stabilize in pumped aquifer units, but without head recovery (scenario 2), additional subsidence of the order of 1 meter is likely to ensue, and subsidence will still be ongoing by 2100.

A subsidence scenario for the location Daan Mogot..

Although we use the best possible data and up-to-date knowledge, imperfect process understanding and paucity of data do introduce considerable uncertainty in the projections. Analogous to climate-change prognoses, or long-term weather forecasts, in the study, an effort was made to quantify the uncertainty by presenting a suite of prognoses for each of the groundwater-use scenarios.

Calculations were done with the Deltares-developed subsidence package SUB-CR. The SUB-CR package works with the groundwater code MODFLOW (or the Deltares code iMOD). It expands on conventional approaches by including creep and secondary consolidation. Varying contributions by creep were included in the prognoses as part of the uncertainty assessment. Creep tends to cause prolonged subsidence after pore pressures in the clayey units stabilize. If creep is important in the clay-rich subsurface of Jakarta, which may well be the case, rapid reversal of the hydraulic head drawdown is even more urgent to curtail further subsidence.

Subsidence will continue many years after Jakarta phases out groundwater use

The study shows that the presence of very thick clay units can cause considerable delays in the response to changes in groundwater extraction. It may take up to about two decades for groundwater-extraction-induced subsidence to stop after groundwater extraction stops. This provides a strong incentive to strongly reduce groundwater use in northern Jakarta as soon as possible through the set of measures identified in a land subsidence mitigation roadmap. The roadmap, which was developed with involvement of all stakeholders, includes both technical and non-technical measures such as improved law enforcement, legal framework revision, water conservation, and provision of piped water from surface water reservoirs.

The updated land subsidence scenarios have been used as part of the basis of design of an updated NCICD (National Capital Integrated Coastal Development) master plan.