Wonder how Earth's surface water changed during the last 30 years? The Deltares Aqua Monitor detects these changes in real-time using satellite imagery for any place on Earth. Deltares has designed an open tool for analysing satellite data and visualising changes in land and water throughout the world. Conclusion: the world has acquired 115,000 km2 of water and 173,000 km2 of land in the last thirty years. The results were published in the journal 'Nature Climate Change'.

The Deltares Aqua Monitor is the first instrument that operates on a global scale, with a resolution of up to 30 metres, to show where water has been transformed into land and vice-versa. It uses freely available satellite data and the Google Earth Engine, a platform for the planetary-scale scientific analysis of geospatial datasets that is now open to the general public. 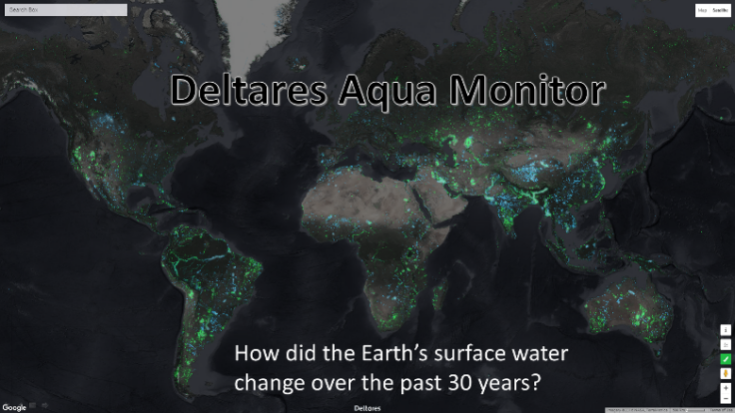 While many countries report on dam construction, information about more remote or isolated areas has been lacking. In Myanmar, the Global Reservoir and Dams database shows an increase in the water surface between 1985 and 2010 of about 400 km2. Using the Aqua Monitor, we found 1,180 km2 of new surface water during the same period. The damming of the Rimjin River in North Korea close to the border with South Korea resulted in a storage surface of 12.4 km2 that was actually due to the Hwanggang Dam, which was thought to be located 35 km to the east. These unknown reservoirs may have had a severe impact on the displacement of people and on the ecology. These issues still have to be investigated.

Created by nature or humans

The results of the Aqua Monitor show only the compound impact of natural and human change or variability. It is often hard to tell what has caused a change without determining the details of the local water and sediment budget. While changes in meanders in the Brahmaputra delta are clearly natural, the Mondrian-like shapes near Taiji Nai’er lakes in China are clearly man-made.

Big data at everyone’s fingertips
Universally-available analytics for big satellite data may have major implications for monitoring capacity and associated actions. At the very local scale, members of the general public can now make assessments without expert assistance if their houses are threatened by coastal erosion. At the regional scale, a downstream riparian state can conduct year-to-year monitoring to see whether upstream neighbours are establishing new impoundments. Finally, at the planetary scale, global agencies such as the United Nations International Strategy for Disaster Reduction can monitor the appearance of new reservoir storage capacity that may reduce flood hazards.