Coastal plains are amongst the most densely populated areas in the world. Many coastal peatlands are drained to create arable land. This is not without consequences; physical compaction of peat and its degradation by oxidation lead to subsidence, and oxidation also leads to emissions of carbon dioxide (CO2). This study complements existing studies by quantifying total land subsidence and associated CO2 respiration over the past millennium in the Dutch coastal peatlands, to gain insight into the consequences of cultivating coastal peatlands over longer timescales. Results show that the peat volume loss was 19.8 km3, which lowered the Dutch coastal plain by 1.9 m on average, bringing most of it below sea level. At least 66 % of the volume reduction is the result of drainage, and 34 % was caused by the excavation and subsequent combustion of peat. The associated CO2 respiration is equivalent to a global atmospheric CO2 concentration increase of ~0.39 ppmv. Cultivation of coastal peatlands can turn a carbon sink into a carbon source. If the path taken by the Dutch would be followed worldwide, there will be double trouble: globally significant carbon emissions and increased flood risk in a globally important human habitat. The effects would be larger than the historic ones because most of the cumulative Dutch subsidence and peat loss was accomplished with much less efficient techniques than those available now. 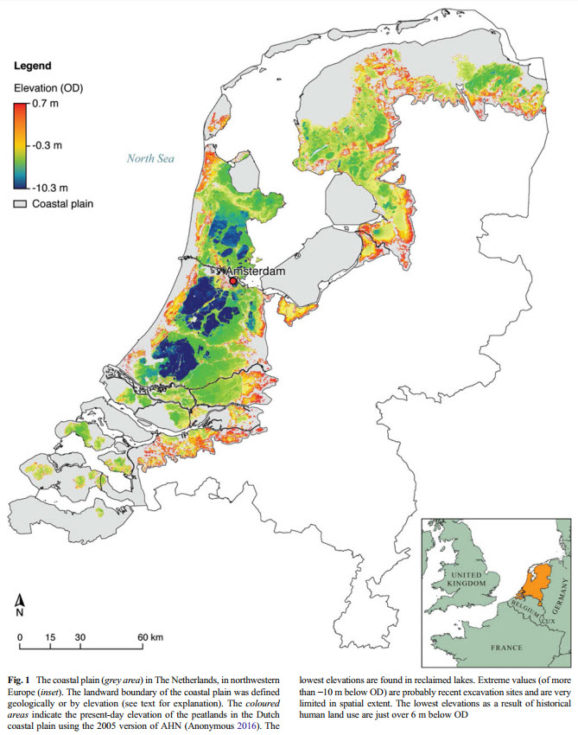