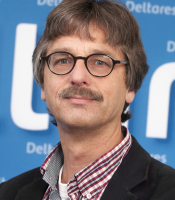 Mr Ottow holds an MSc degree in water management from Wageningen University, the Netherlands and an MA degree in Intercultural Studies from Wheaton College Graduate School, USA, with a special focus on cross-cultural training. He has developed, taught in and lead many international training courses on water management, wetland management and wetland restoration.

The last ten years he has focused on the design and facilitation of effective participation processes in water management, both in the Netherlands and abroad.