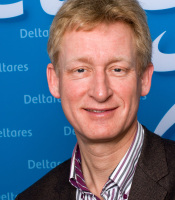 He started his career in 1988 at Delft Hydraulics in modeling nutrient emissions from agricultural fields in the Netherlands. He later developed, during a series of projects in Central and Eastern Europe, as well as China SE Asia and Egypt, a generic tool to model waste load emissions to surface water. The tool is now implemented as Emission Module in the Deltares Software products Sobek and Delft3D.

In 2002 Mr. Ruijgh became manager of the Delft Hydraulics Catchment Hydrology Division, responsible for discharge extremes, the development of Delft-FEWS for operational flood forecasting, and global hydrology and climate change. After the start of Deltares in 2008 he headed the Deltares Catchment Hydrology Division responsible for global hydrology and climate change, as well as urban and regional hydrology.

Since 2015 Mr. Ruijgh joined the Deltares team for hydraulic structures. He is an expert and senior project manager for a number of national and international projects focusing on locks, weirs and storm surge barriers. He recently was involved in project on the New Panama Locks. Mr. Ruijgh is also managing the Deltares knowledge impulse program on Replacement of Hydraulic Infrastructure.