D-Flow Flexible Mesh (D-Flow FM), as the successor of Delft3D-FLOW and SOBEK-FLOW, is capable of handling curvilinear grids that provide very good performance in terms of computational speed and accuracy. In addition to this, the grid may also consist of triangles, quads, pentagons and hexagons. This provides optimal modelling flexibility and ease in setting up new model grids or modifying existing ones, or locally increasing resolution. 1D- and 2D grids can be combined, either connecting adjacent grids or a 1D grid overlying a 2D grid. Both Cartesian and spherical coordinate systems are supported. This facilitates tidal computations on the globe with tide generating forces, thus without imposing open boundary conditions. The grid generation tool RGFGRID includes new grid generation algorithms for the construction of orthogonal unstructured grids. 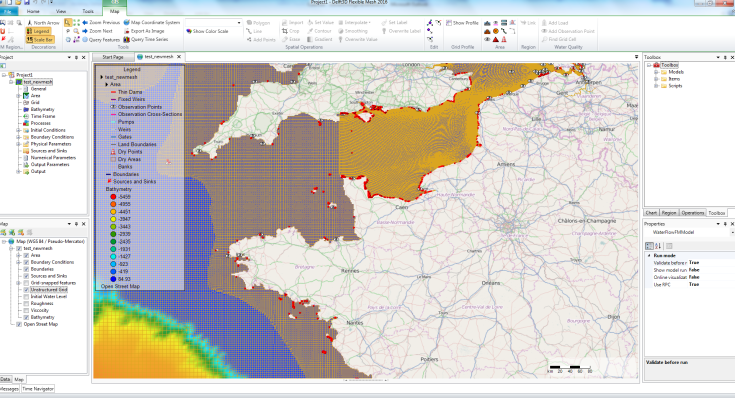 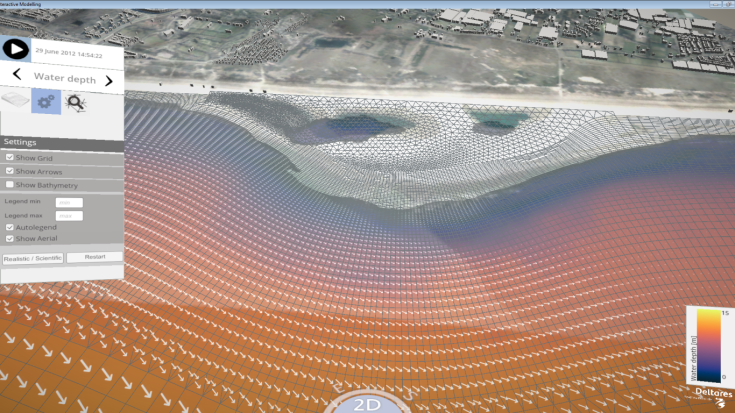 For three-dimensional modelling, three turbulence models are available: algebraic, k-epsilon and k-tau. Vertical transport can be solved both explicitly and implicitly. First sigma layers were implemented, with the anti-creep option based upon the Delft3D-FLOW algorithm. Fixed z-layers are also available, and z- and sigma-layers can be combined in one single model domain, but this is still ongoing research. Temperature modelling is supported either using the composite heat flux model or the excess heat flux model, which can both be driven by space-and-time varying metereological datasets.

Time integration is done explicitly for part of the advection term, and the resulting dynamic time-step limitation is automatically set based on the Courant criterium. The possible performance penalty can often be remedied by refining and coarsening the computational grid at the right locations.

D-Flow FM models can be run as parallel computations on distributed-memory high-performance computing clusters. The parallel version is based on the familiar MPI standard, and partitioning of the model domain can be done automatically by the (included) METIS-partitioner, and/or defined by the user. Parallel computing is functional both on Windows and Linux. On Linux the PETSc matrix solver library can be coupled, and this is the preferred way for good performance. On single machines with multi-core processors speedup can also be achieved by D-Flow FM’s built-in OpenMP-multithreading option, which is the default setting.