In harbours large ships in narrow passages can cause large problems because of the suction effects these ships cause. This can lead to problems as breaking mooring lines, damage to loading and unloading installations and production decrease. It is important to make ports safer and to prevent accidents.

Deltares performed tests in the Atlantic Basin (wave current basin) to study the suction effects of passing ships on ships moored in a port. 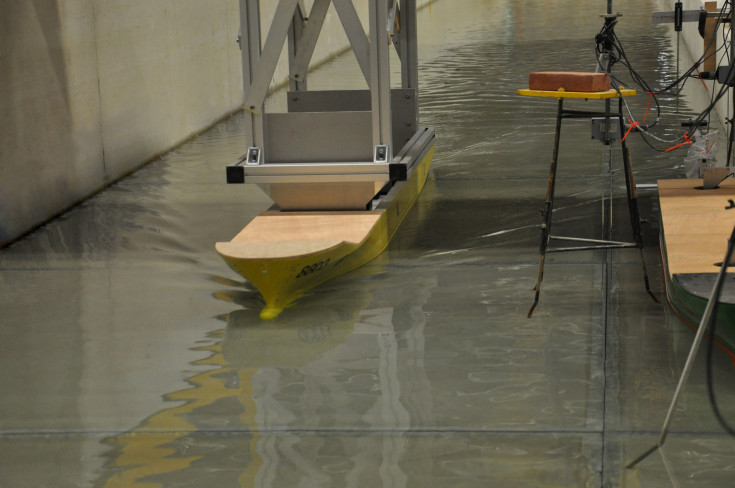 In the project JIP ROPES (Joint Industry Project Research On Passing Effects on Ships) the model tests were very important. Scale tests were carried out for different port layouts to test the relationship between water movement and forces acting on a moored ship. The hydrodynamic effects due to passing ships are just as important to port safety as tidal conditions and waves. Especially since container ships keep getting bigger.

This research provides new international insight into and guidelines for safer design and use of existing and new ports. In addition to the model test, a monitoring campaign has been conducted in the Port of Rotterdam, including a mooring facility for ship-to-ship transfer of mammoth tankers. The data of the model tests and measuring campaign is used to develop a validated computer model to predict the effects of passing ships on ships moored in a port.

Deltares has studied the relationship between the water disturbances and ship motions for various port layouts. In this way you know exactly what happens in a dock or when you moor ships one behind the other. Deltares has a lot of experience in modeling port layouts and therefor studies the more complex port situations, including the influence of currents. Furthermore, Deltares mapped the effects of passing ships using the software Xbeach, a numerical model to predict near shore waves and currents that can also be applied to harbours.

JIP ROPES is a joint research project in which 25 international parties worked together, including port authorities, pilots, rowers, engineering companies and knowledge institutes.

Watch the video of JIP ROPES.