Wind, waves and currents shape our coasts. Climate change and rising sea levels add further to this pressure. To enable us to live safely along our shores, we need effective coastal and marine management. Moreover, these coastal processes do not present the only threat. We must also protect ourselves against excess river water, while on the other hand we need that water for transport, irrigation, energy, cooling, recreation, environmental protection and as a source of drinking water. Consequently, design and management procedures become more complex and require an integrated approach. In response to this challenge, Deltares has developed powerful modelling suite software called Delft3D, focusing primarily on application in the free surface water environment.

Delft3D is a integrated modelling suite, which simulates two-dimensional (in either the horizontal or a vertical plane) and three-dimensional flow, sediment transport and morphology, waves, water quality and ecology and is capable of handling the interactions between these processes. The suite is designed for use by domain experts and non-experts alike, which may range from consultants and engineers or contractors, to regulators and government officials, all of whom are active in one or more of the stages of the design, implementation and management cycle. 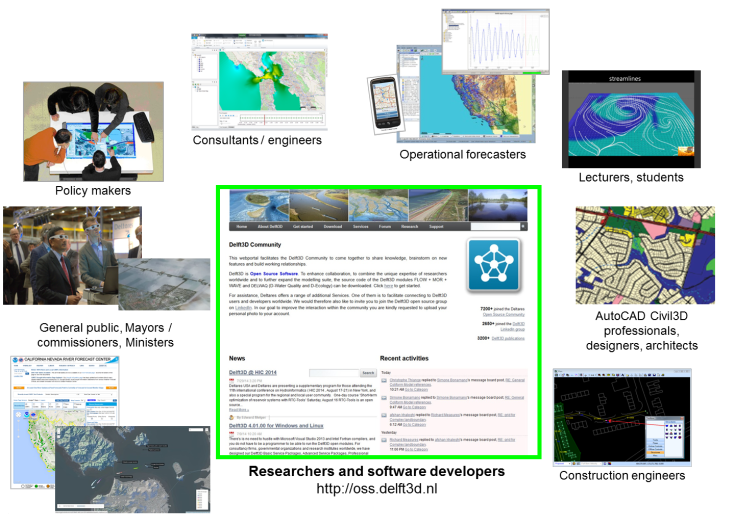 How to get Delft3D?

Both Delft3D FM and Delft3D 4 (structured) are available via our Delft3D Service Packages. The software is unlimited in the number of users and you may use the software for an indefinite period of time; in other words, forever. Depending on your requested level of convenience, the prices may range from an one-time subscription fee of €3,550.– only, up to an annual fee of €33,750.–. Note that the minimum subscription period is one year. Continuation after the initial year is optional, but recommended.

You can easily order one of our service packages via software@deltares.nl and then download the software via our Download portal.

Delft3D 4 (structured) allows you to simulate the interaction of water, sediment, ecology and water quality in time and space. The suite is mostly used for the modelling of natural environments like coastal, river and estuarine areas, but it is equally suitable for more artificial environments like harbours, locks, etc. Delft3D 4 consists of a number of well-tested and validated programmes, which are linked to and integrated with one-another:

Especially designed for consultants and engineers, the Graphical User Interface (GUI) of Delft3D 4 (structured) allows to visualize model input, reference data and simulation results as time series and animations. The moving image of the flows in and out of an estuary, for instance, can be observed and examined in gradual, fast forward and fast backward mode. The user can also gather a wide, overhead perspective of his entire system or, by contrast, zoom in on a site of particular relevance or difficulty.

Delft3D 4 is open to various data visualizations. One of the most powerful tools is the option to export data to Google Earth, using OpenEarth Tools.

The validation of a modelling system, such as Delft3D 4 (structured) and Delft3D FM, requires continuous attention. Even though the individual programmes of the suite have been thoroughly tested during their development, the suite as a whole requires intensive testing and also validation. To this end, a regular programme has been established and tests of many of the most likely combinations are continually performed. As a policy, new versions are released only after an extensive beta testing period, to ensure that our users are provided with stable and validated products.

The Delft3D support desk is the user’s instantly accessible contact point for all questions and problems concerning the software. The support team answers the majority of questions instantly or ensures that a timely reply is given by one of the other Delft3D team members. All incoming queries on the programmes, current or future performance, are recorded in our professional issue tracker system. This system is an important instrument in the realisation of improvements to the programmes, the manuals and the Deltares Academy training courses. New versions of Delft3D will be released once a year to all users, as part of their service package.

Delft3D is Open Source Software. To enhance collaboration, to combine the unique expertise of researchers worldwide and to further expand the modelling suite, the source code of the Delft3D modules FLOW + MOR + WAVE and DELWAQ can be downloaded. The worldwide release of Delft3D Flexible Mesh in open source is scheduled for later in 2023. For more information, please visit our Deltares open source community portal (http://oss.deltares.nl/) or the Delft3D open source website (http://oss.delft3d.nl/) directly. More than 30.000 software developers and users worldwide have daily access to the source code. 10.000+ Delft3D publications are available via the Delft3D open source website.

To keep Delft3D up-to-date with state-of-the-art knowledge, we constantly update and extend the system. Please contact us if you are interested in particular features that go beyond the default functionality mentioned. Developments currently include:

For our beta testing programme, please contact our software team.

Please find below the projects where this software was involved.

Delft3D 4 is offered as part of the Delft3D service packages. They include the latest version of the fully validated high quality Delft3D 4 Suite (structured) and the new Delft3D Flexible Mesh Suite. There are different Service Packages available to suit your specific needs.

We are here to help you with all your Deltares software products and solutions.

Designed with you in mind, they offer you your requested level of convenience.

The advised requirements are a configuration consisting of:

Mass balance output on Delft3D-FLOW history files
Now we offer mass balance output on the Delft3D-FLOW history files. Given a number of user
defined polygons the Delft3D-FLOW program computes the total water volume and the average
constituent concentrations within each polygon and the fluxes from one polygon to the
neighbouring polygons. This offers the following possibilities:
1. To analyse characteristic large scale flow and transport patterns
2. To easily plot time series of masses and fluxes from the Delft3D-FLOW history file using
QUICKPLOT
User defined spatial area for Water Quality (Delft3D-WAQ)
Now you can easily define an area of interest for a water quality simulation run at a time, you can quickly start piling up
windows on your desktop. It is sometimes hard to remember what you have already started.
that is where the run identification comes in handy. Whenever you start a run, Delft3D shows
the run identification string in the window title.
New command line run procedure for Delft3D-FLOW
For those who are using the command line option for running the Delft3D-FLOW program, we have
changed the command line procedures. This is the result of one of the first steps in the
implementation of our Next Generation Hydro Software (1D/2D/3D). Delft3D-FLOW is now a dynamic
load library (ow2d3d.dll/so) which allows the sharing and changing of code and data in a
modular fashion in open source. Example scripts for running the Delft3D-FLOW program are
available on our Delft3D open source community website: http://oss.deltares.nl.