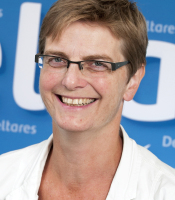 Manager of the department of Water Risk Analysis

Annemargreet de Leeuw leads the department of Water Risk Analysis at Deltares. Her role is to guide this team of excellent experts, to set out the strategy for the department and to perform daily management of the portfolio. The experts in the department have a variety of excellent knowledge on, amongst others: a) statistical regional analysis of weather, b) probabilistic analysis of hazards (sea level, river discharge, rainfall, groundwater, etc.) c) impact analysis, d)robustness and resilience analysis, e) climate change.

Risk analysis involves the quantification of the probability of potential damaging events, the associated consequences and the ability of the system or society to recover from such events. Water management can benefit from a risk-based approach, in which management alternatives are compared based on the resulting reduction of risk. Relevant water related risks include floods, droughts, contamination, salt water intrusion, and land subsidence. Different sets of mitigating measures can be evaluated for different scenarios of climate change and development of the area under consideration. The effectiveness of measures is expressed in terms of risk reduction. The advantages of applying a risk based approach are that it brings a uniform knowledge basis with which different types of measures can be compared, using the same criterion (risk reduction), and that reduced economic risk can be considered the economic benefit of measures. A cost-benefit ratio can easily be derived.