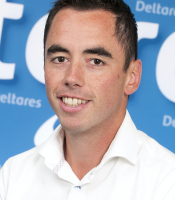 Expert on underground constructions and climate change effects on infrastructures

Thomas Bles (1979) is a senior consultant at Deltares, working in various working fields being underground constructions, pipelines, extreme weather impacts on infrastructures, risk analyses and incident management. Binding factor in these fields are large uncertainties, cooperation with many different parties and a translation of specialist knowhow to feasible end products.

Thomas Bles obtained his MSc at the University of Twente on Civil Engineering and Management. During his master thesis he developed a risk based expert model for decision support on pile foundations. His experiences with expert modeling became the basis of the DeltaBrain development, which now is a special research facility of Deltares. The combination of expert knowledge, experiences and existing models, together with high emphasis on communication to the user, makes DeltaBrain an excellent tool within knowledge and risk management. In 2008 he won the Regieraad Bouw innovation price for these developments.

The central theme in the focus of his projects became risk management. He was project leader of a joint industry (Delft Cluster) research project on the development of a guideline for monitoring deep excavations and now works on a guideline for the Observational Method. In 2006 he did research on construction risks of large diameter pipeline infrastructure. He is project leader of several Geo Risk Scans which provide insights into the quality of the geotechnical risk management in the large Ministry of Works infrastructural projects. Since 2009 Thomas is involved in the Amsterdam North South metroline as geotechnical field engineer. His work includes the identification of geotechnical risks and risk analyses, always aiming at a translation of the technical knowhow into feasible advices for the project team.

He worked on the international research project RIMAROCC (risk management for roads in a changing climate). The results of this research project have been applied in a project for the Dutch national highway network, that was lead by Thomas, aiming at gaining insight in the risks for flooding plus an action perspective for keeping in control in the future. Since 2012 he is project coordinator of the European ROADAPT project that aims at developing hands on methods as an extension to the RIMAROCC framework.