The Port of Rotterdam needed to extend the current reclaimed area, the Maasvlakte, in the seaward direction to allow the port to expand. The new area is known as ‘Maasvlakte 2’ and it provides 1,000 hectares of sites located directly alongside deep water that will be available for container transport and the chemical industry. The reclamation work was executed by the contractors Van Oord and Boskalis, who worked together in the PUMA consortium. The sea defence of Maasvlakte 2 comprises a seven-kilometre stretch of sandy coast (beach and dunes), together with 3.5 kilometres of hard sea defences. The hard sea defences consist of a cobble shore  with a reef of concrete blocks (cubes), that make up a “tandem” breakwater. This innovative combination of cobbles and cubes has never been used before and it required physical modelling to evaluate feasibility and further optimise the design. The 40-tonne concrete blocks used in the new cube reef were obtained by recycling the blocks from the cube reef protecting the old Maasvlakte 1 port extension. 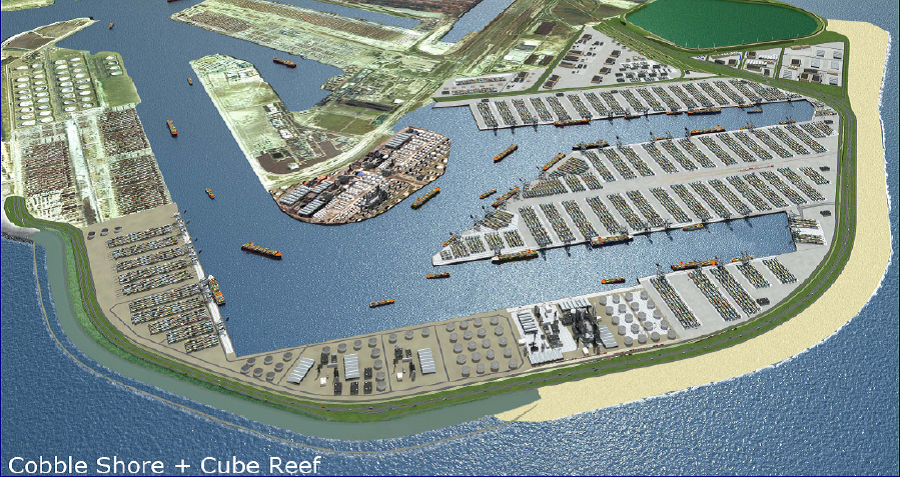 Deltares helped with the design of the hard sea defences during the tender phase, the design phase, and the building phase of the project. Both small-scale (approximately 1:50) and large-scale (approximately 1:5) physical modelling studies were carried out to optimise and test the effectiveness of the sea defences. Without the large-scale Delta Flume, it would not have been possible to verify the stability of this structure.

All publications
Back to Coastal and River Structures